WAKE UP CALL: PART ONE 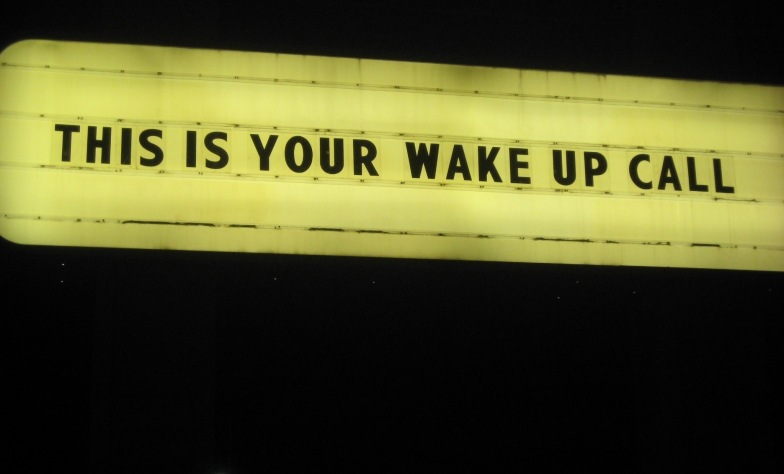 Later today I’m going to be interviewed by Lindsay Konsko from NerdWallet about how I had a “wake up call” from looking at my credit card statements. I’m super excited! I’ve been thinking about how to tell her the story of my financial journey, and it got me thinking about financial wake up calls in general. I’m going to break this into two parts. Part two can be found here.

I am not naturally a saver. Money has always burned a hole in my pocket. In high school and college I worked hard waitressing, babysitting or tutoring to earn my money, and that meant that I deserved to spend it on nice things, right? Otherwise, why would I bust my hump like that? I always remembered to set aside enough to pay any bills that were going to hit between now and my next paycheck, but that was about the extent of my financial intelligence.

At the time (mid-2012) I was banking with Bank of America, and was signed up for their Keep the Change program, where they would round up every purchase I made with my debit card and transfer the extra balance into savings. A good idea in theory, but you know what I did? I would transfer the money back into checking and go spend it. I didn’t even bother to opt out of the program. I just manually transferred the money back week after week after week.

While I look back and can't believe how dumb I was, at the time it didn’t feel worth it to leave it in savings, where it wasn’t doing anything for me. Maybe if it had been hundreds or thousands of dollars, then it would have meant something to me. But five bucks here or there? What was the point of saving it?

I danced at the edge of overdraft every day. When I first started tracking my money on Mint.com in 2012, I had less than $200 in the bank. (And $35,000 in debt, but that’s a whole other enchilada.) And it didn’t bother me in the least. I managed to buy everything I wanted, so I felt like I was doing just fine.

In June 2012 I was lucky enough to start working at a big grown up job that offered a 401k and a match. I didn’t know what that meant, so I googled it, and realized that it was free money! If I put some of my money in a savings account, the company would put money in too. Cha ching! So I signed up to receive the complete match.

When I got my first paycheck, I noticed that a grand total of $91 dollars had been added to my 401k.

I was underwhelmed, to say the least. That was $91 I would have liked to have spent on sushi or a date night. It was hardly doing much for me sitting in that retirement account, out of my reach. All I wanted in the world was to transfer the money to my checking account just like I always did with those Keep the Change dollars. But (fortunately) I couldn’t withdraw it without paying a penalty.

So I just ignored it. It didn’t feel worth it to pay attention to a measly $91 every two weeks.

My jaw dropped. I’d never seen more than a three-figure balance in my accounts unless it was for a credit card or a loan. How was it possible that this money had just grown like that? All I’d done was transfer a small amount of money every month and let it earn interest...

It was a true lightbulb moment. I couldn’t believe how good — how secure — it felt to see real numbers in a bank account. And it hadn’t even been hard! I’d barely felt those bi-weekly withdrawals. For the first time I understood what it meant to delay gratification. I could have spent those $45 a week on food and clothes and whatever else I wanted, but that could never have felt as good as it felt now to stare at that thousand dollar balance on my computer screen.

It was the beginning. Now I just needed to get out of credit card debt… Click here to hear about those stories in parts two!